At Tracks & Fields we’re starting a new blog series focussed on the auditory core of brand communication. Brand Listener analyses the use of music in a brand’s ads – the type and genre of music used, the role it plays in a placement, and the music’s relationship with the visuals and other audio within the ad, such as voiceover. We use several metrics to examine a brand’s relationship with music. Our first post is dedicated to Korean tech giant Samsung, specifically to advertising for the Samsung Galaxy range of devices (including the Galaxy S, Note and Tab.) Our analysis was conducted in May 2014, examining international ads (screened in territories including Canada, Korea, Hong Kong and the U.S.) for the latest model of each device. 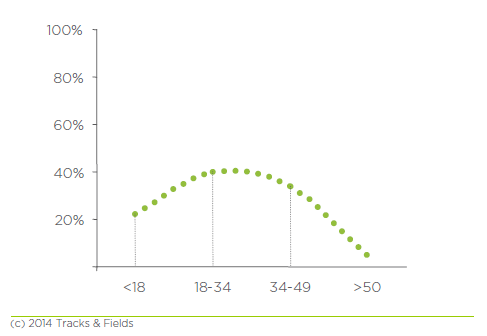 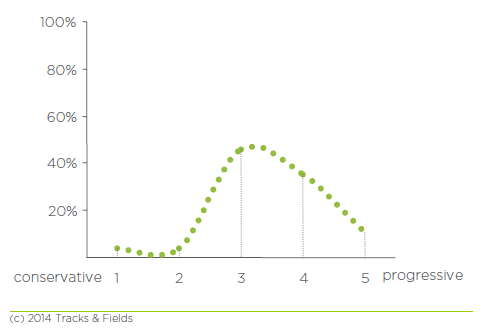 As the current smartphone market leader, Samsung targets a very wide audience. Their Galaxy ads are geared towards users from teens to seniors, although they arguably target a little more heavily towards a younger, 18-34 audience (see chart I). Predominantly conveying core values of versatility, top-notch technology, and modernism, their brand communication aims to speak to a progressive audience (see chart II).

Save some exceptions, such as some of the “The next big thing is here” or Galaxy 11 campaigns, the majority of Samsung advertising tends to be strictly product oriented rather than rooted in concepts of overall brand appeal. Highlighting specific product features, superior technology and the versatility to be the perfect companion in any situation, the advertisements balance both rational and emotional benefits of the products, slightly favouring the rational (chart III, below left).

Artists featured in Samsung Galaxy ads include Lykke Li, Imagine Dragons and The Black Keys, but is there an underlying “music DNA“, a predictable pattern in Samsung’s choices? Just over one-third of Samsung’s spots feature songs (with vocals) rather than instrumental compositions. However, nearly two-thirds of the ads assessed feature instrumental compositions, mostly unobtrusive so as to support the rational, product-oriented communication approach of the series (chart IV, below left).

The music used in brand communication must speak to the target audience. In Samsung’s case, their wide audience means that “extreme” music aimed at a niche listenership should mostly be avoided. Samsung handles this issue with the use of a variety of musical genres, with pop (used in one-third of the adverts viewed) being the dominant genre. Orchestral and classical pieces are also used, to support the premium feel of the images and to add a certain high-class nuance to the product itself (chart V).

The sound image of the Galaxy series is a rather “organic” one; independent of the musical genre, mainly music with organic instrumental elements or elements produced to sound organic rather than computerised is used. Even in ads with more “futuristic” settings and themes, the organic sound core remains, supported by more overtly synthetic elements to reinforce the image of modernity and cutting edge technology. These instrumentation and production values seem to aim to kindle or support a sense of humanity – bonds are created and strengthened between device users, and the helpful place of the device in everyday life is cemented.

A large portion of the ads assessed use music with medium percussion to drive the ad narrative and provide momentum without distraction. However, an equal number use music with little to no percussion (chart VI) to keep focus centred on the visuals. Storytelling in the ads tends towards a lower tempo, with the tempo of the music used to complement the pace of the visual storytelling (chart VII). 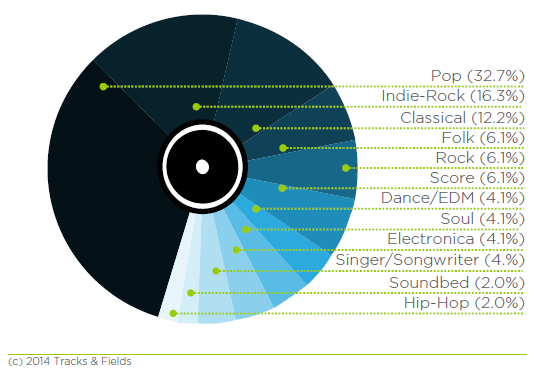 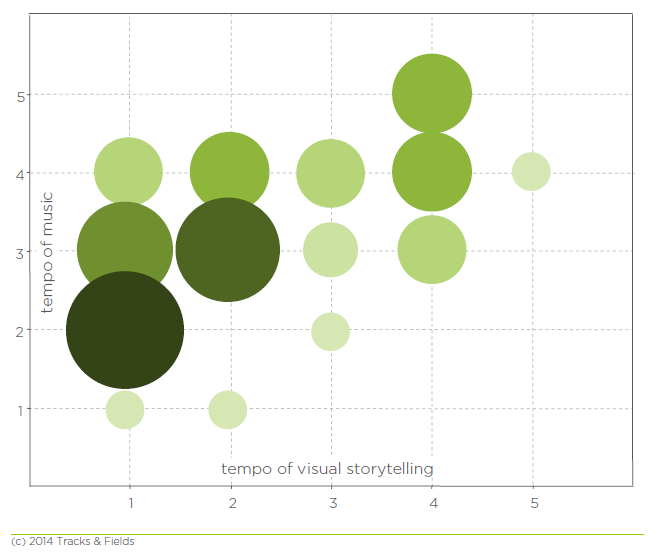 With only a few exceptions, the ads speak mainly through images and music: the use of voiceover and sound effects is rare or subtle, regardless of the degree of attention commanded by the underlying music. When songs are used rather than instrumental compositions, the ad is usually structured so that the music commands a high degree of attention (chart VIII). So, to what purpose is music being used in the advertisements for the Galaxy series? We distinguished between six different purposes of music in advertising, as classified by musicologist David Huron:

Applying this to the Galaxy series of products (chart IX), it’s clear that Samsung here use music to provide structure and continuity (in all cases) as well for entertainment and attention (just under 60% of cases) and for conveyance of product characteristics (perhaps 35% of cases.) As Samsung aims to target a large commercial audience, the purpose of targeting very specific groups is of lesser importance and therefore applies to only about one fifth of ads assessed. As noted, the majority of ads opt for instrumental tracks, but if songs with lyrics are used these are mostly co-ordinated to enchance or complement the visual story (the purpose of lyrical language – for example, the use of Raphael Saadig’s ‘Keep Marchin’ in the LeBron James series of ads.) No jingles or similar are used for the Galaxy S5, Note or Tab.