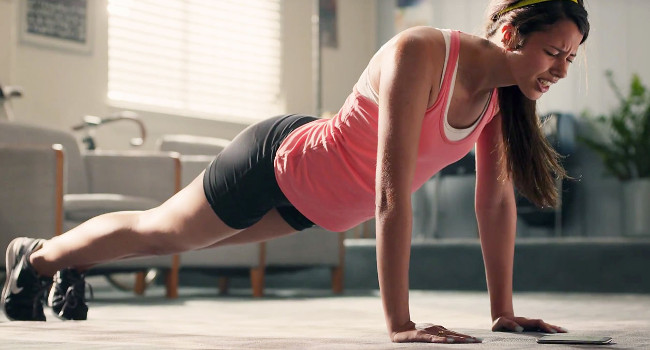 It’s a trim and sporty lineup in our roundup of fit recent ad sync, but all this clean living hasn’t left things too serious – there’s still plenty of twinkle in these eyes.

Celebrity ad appearances this month have ranged from the overt (Sylvester Stallone front and wildly improbable centre for Warburton’s) to the easy to miss: Rutger Hauer narrated Lurpark’s gloriously jazzy and typically vibrant new spot. Sony took on a rather different spokescreature, in the form of an extremely deft octopus.

Ever trusty Ronseal changed up its winning ad formula, while car brands such as Toyota and Volkswagen displayed a sometimes dark sense of humour – but not as dark as Unicef Sweden. Finally, Lykke Li continued to cement her niche as cool commercial queen with another stylish yearning number, this time performed for Gucci.

Old Navy blow away any hint of clothing-in-the-wild lookbook staleness with this kinetic display of what their threads (and those wearing them) are capable of. The colourfully clad young stars dance, box, pummel and leap their way through thirty electric seconds, powered by the stream train relentlessness of ‘Revolution Town’, a typically harmonica-driven stomper by Son of Dave (Benjamin Darvill, formerly of Crash Test Dummies fame).

Cadbury and Fallon continue what has become a veritable institution of joyful ad silliness to introduce the latest Dairy Milk creation. As usual it’s distinctly character-led, and this time two dinner ladies take the mid-morning limelight to showcase excellent eyebrow work (following in a fine tradition for the brand) and an unsuspected skill: virtuoso spoon-playing. Rather than the 70s smashes of their recent hits, this spot chooses an oddly fitting 90s monster: 2 Unlimited’s ‘Get Ready For This’ (the lead sample of which, pub quiz fans, comes from D.O.C.’s ‘It’s Funky Enough.’) The left-hand spoonmistress, Marylyn Campbell, has played for 36 years and was apparently discovered by the agency through Youtube. It’s a neatly daft musical blend (which makes sense given that the director team behind it also brought Three’s ‘Sing It Kitty’ to mad-eyed life) – if anything we would have liked to hear the spoons dialled a little louder!

Smart France delivers a pretty straight diss on longer and more ungainly car brands with this day in the life of a parking space tiny enough to break even the most hardened city motorist out in a cold sweat – unless they drive a certain diminutive two-door. Their fake apology is delivered by Brenda Lee’s teenage tale of regret, and the slightly off-kilter strings keep the contrition nicely insincere.

Vodafone deliver a high-octane two-hander with the help of an aggressively Cockney voiceover and two hip hop hard-hitters a decade apart. Shown in the door by an instrumental edit of Snoop Dogg’s big entrance ‘G’s and Hustlaz’ and its deceptively innocent opening ice cream truck jingle, we meet a cast of charismatic UK characters of all shapes, ages and hobbies as they pose, preen, mess about and do their thing. The brass-necked horns and relentless beat of DMX’s ‘X Gon’ Give It To Ya’ continue the strut.

Songs: Gz and Hustlas; X Gon Give It to Ya
Artists: Snoop Dogg, DMX
Agency: Grey London
Production: Iconoclast
Directors: We Are From LA

The cast of rich kids wearing sunglasses in the middle of the night might be hard to warm to, but the soundtrack intrigues. Melody’s Echo Chamber, headed by aptly-named Frenchwoman Melody Prochet and bolstered by Tame Impala’s Kevin Parker, teased a second album with ‘Shirim’. Here the jangly guitar and that ragged, rubbery bass, swathed in Prochet’s ethereal vocal, deliver a shimmering and amply stylish taste of summer.

Nike – Better For It

A range of women, wracked with insecurities and self-consciousness about their bodies and fitness levels, battle their way past their discomfort into the joy of sport and movement. The viewer is privy to their internal monologue, their outwardly already slim and trim appearance perhaps pitched to remind us that no-one is free of self-flagellating thoughts. ‘Joy’ by Apollo 100 (itself a snappier 1970s rework of Bach’s ‘Jesu, Joy of Man’s Desiring’ nicely steeped in analogue warmth) plays a muted yet important role in the spot. It starts in absolute silence save for the meek narration, but as the ladies become less preoccupied with their insecurities the jubilant keys build to reflect their endorphin high and burst of new confidence.

A brash drumroll leads us through an assortment of people in varying states of jitters and high tension, whether from an oncoming physical terror or a high-stakes note-pass – but the glory’s in the payoff, as Johnny Thunder’s ‘I’m Alive’ roars into soulful life and exhilarated smiles break out. However much it reflects the real buzz around the S6 release, the spot certainly doles out a hefty dose of strut fitting to a pair of products touted as Samsung’s best ever smartphones.