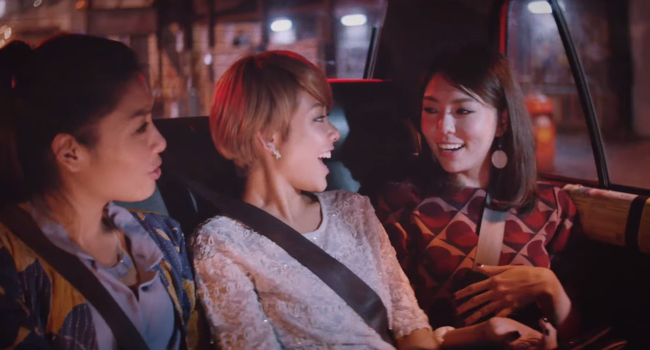 Our latest selection of tidy ad music is a mix of carefree and frantic, sweetly festive and distinctly nasty – sweet indie and 80s anthems both get a look in.

In more general ad biz, (and perhaps in the spirit of Christmas) there have been plenty of spots vying for attention in their own ways. Mobile games had a bit of a high-spec live action moment last week, with Kate Upton and a giant gummy bear fronting campaigns for Game of War and Candy Crush respectively. Holding down the cute fort were Anna Kendrick for Kate Spade, Aussie, and a pile of kittens for Purina Tidy Cats. Kmart continued last year’s format in a rather less urbane vein, Chris O’Dowd and Nike walked away with Most Scathing, and the distinctions of Best Pensioners and Most Unexpected Case Study Soundtrack went to Pizza Hut and TUI.

Tiffany unbox a bright bauble of a Christmas offering this year. Animators Psyops deftly revel in properly gorgeous 1960s-styled animation and escapism, creating an abundantly blue and wintry New York filled with ice rinks, worry-free couples and massively oversized jewellery big enough to decorate your tree with. Naturally. The crisp and glittering tone carries through to the soundtrack: a blithe confection from L.A. Singer-songwriter Chauncey Jacks. It might be slight, but damned if it isn’t pretty charming, and it ties in nicely with a print campaign. Bit cruel on New York City’s Buffalo neighbours to see all these gleeful types enjoying reasonable snow levels, mind.

Cartier continue with their now well-established leopard cub festive motif, this time ramping it up a bit. About 3000 metres up, in fact. Rather than film score as in the previous two editions, this time the spot plumps for more traditional festive fare with Bing Crosby and the Andrews Sisters cozily purring ‘Here Comes Santa Claus’. Its dainty late-40s bounce suits the tone quite well, confusing though the lyrics must be for child believers in this context. The (very handsome) CG and concept leave the whole production lodged firmly in the Uncanny Valley (who knew it existed for big cats too?) but at least it’s definitely the cute side.

Though it doesn’t have quite the same big-production charm as last year’s balletic, sting-in-the-tail production, this year’s much more naturalistic and also female-driven Bailey’s Christmas spot does manage to capture a dose of the bubbling excitement of finally heading out the door on a big night out. A lot of that vivacious forward momentum is thanks to the ad music: the driving signature track from New Wave power women The Go-Go’s, which lends the night a simultaneously punky and wholesome spark of extra life.

This working mother-focussed spot isn’t quite as neatly edited as previous efforts, but it does convey something of the more-haste-less-speed drama of the latecomer’s experience, and the driving xylophone of An Pierlé both stands in nicely for the clock’s threatening ticking and builds with gentle lyrical determination.

GTA brings its fifth installment of nastiness to the Playstation 4 and XBox one. With its nicely incongruous, optimistic lyrics, Sly Fox’s one-off 1986 hit fits as neatly with the dog-eat-dog themes on show as it does with the palm trees and dodgy jewellery choices littered throughout.