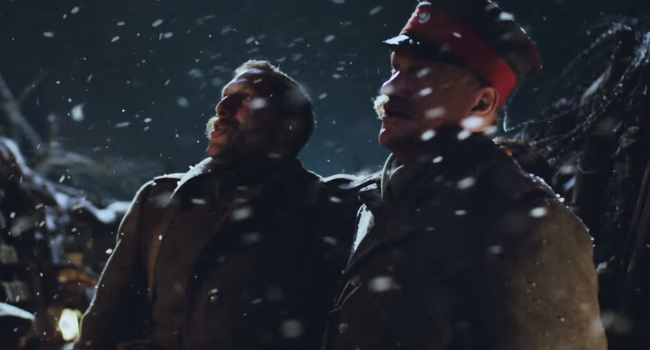 The Christmas spread continues, through we’ve strived to lay on a few non-seasonal savouries in between. This edition of the week’s most interesting sync is full of glittering sweetmeats, smashed-up fancies and chocolate with surprising historical substance, set-dressed with everything from swinging crooner classics to understated indie.

Elsewhere rather heavy-handed singalongs have abounded, in very different sectors: Vodafone got on board the Frozen love train to celebrate everyone stuck in imperfect festive situations, whereas Think!’s new campaign made brutal and hollow-eyed use of a Christmas party standard.

Marks and Sparks continue their Christmas ad tradition: light of heart with lashings of fantastical visual sumptuousness. This time they forgo celebrity cameos in favour of two sharply-coiffed, seemingly on-the-clock fairies who take to the yuletide skies in party dresses to dole out festive deserts (see below for desserts) to the denizens below, help out hapless gifters, matchmake and generally sparkle up the festive season. Julie London’s sultry-yet-cheerful, jaunty take on Fly Me To The Moon is a tailor-made accompaniment. The spot has already proven to be a firm audience favourite alongside a simple and quite sweet twitter campaign. German viewers can watch the full spot here. Of course, no Marks and Spencer campaign would skimp on the grub: there’s also a swooning closeup on dinner.

Verdi’s La Forza del Destino, lightly reworked by Jean Claude Petit for Jean de Florette and Manon des Source, conjures a complex palate of emotions thanks both to those those films and Stella Artois’ amusingly black-hearted campaigns throughout the nineties: avarice, regret, dark comedy. This time tongue-in-cheek self-pity is to the fore as we explore the dark side of the Bader-Meinhof Phenomenon: our poor sap of a protagonist misses an unmissable show, which snowballs into a ubiquitous, inescapable cultural reference he grows to loathe. That mournful clarinet is with him every miserable step of the way. Director Bart Timmer, also behind sharply-scripted spots for Brother and Canalplay, gets points for taking this one literally as far as it will go. It’s pretty self-explanatory, but for the subtitled version click here.

The slo-mo smiles are a little unhinged and the decorations overabundant, but this one gets points for an entertaining musical twist: a brass take on Irene Cara’s full-throttle Flashdance theme ‘What A Feeling’. Who knew it needed French horns? If that final Olympic-sized lights-on display looks improbable, know that’s only the tiniest of tasters – try the full, utterly bonkers video on for size.

Sainsbury’s and the Royal British Legion

Sainbury’s contribution to the emotionally affecting side of the ad equation has divided audiences as was perhaps inevitable, but there’s no denying that’s this examination of the First World War’s most celebrated (and notorious) truce is a well-timed and sharply crafted spot. With little dialogue, the spot makes strong use of its actor’s faces and of two pieces of music: the soldiers’ multi-language renditions of Silent Night that drift across No-Man’s Land, and a piece of film score used to new ends. Carter Burwell’s ‘The Wicked Flee’, first used in True Grit and based on 1880s hymn ‘Leaning on the Everlasting Arms’, lends gentle keys to the soldiers’ first tentative meeting and growing sweep to their football match.

Three, known for their lightly bonkers ad style, channel it into a fairly heartfelt homecoming this year as a globe-trotting dad works out the perfect surprise present for his daughter. The idea is of course barmy, but the details well-observed and the accompanying sync – Wolf Larsen’s ‘If I Be Wrong’ – though lyrically a little dark, a musically solid choice in its fresh, understated poignance.

Song: If I Be Wrong
Artist: Wolf Larsen