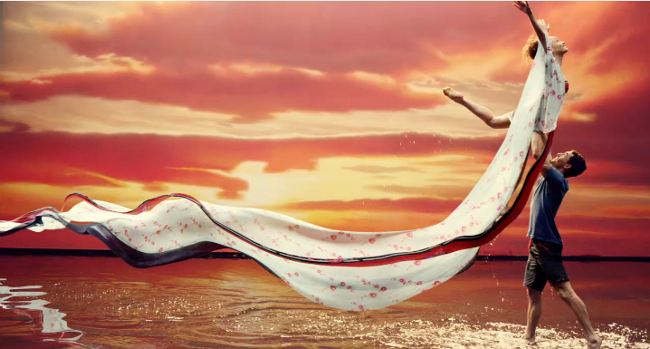 This week’s selection of fine synch is all dressed up. From billowing fabric trails to gleaming chrome to ill-advised shirts, these spots star characters who are decked out and unafraid to strut their stuff.
The spirit of inventive fun is pretty infectious in another department too – Oreos produce the latest installment in a spate of interest around getting creative with sound (for reference: COS’s kooky pair of foley artists, our own collaboration with Lufthansa and Kolle Rebbe, and Nestle’s festive take last Christmas.)

Lycra’s colourful spot is a beautiful combination of the novel and the known. Happily clothed people dancing through their day is a familiar base, lifted to near-magical new heights by beautifully lit sets and bewitching visual effects. It’s kept airborne by the blithe and swooning strains (and slightly tweaked lyrics) of Nouvelle Vague’s ‘Dance With Me’, a cover which, at least in the advertising landscape, has long eclipsed the fame of the original by gothy new wavers The Lords of the New Church.

Nike encourages South Korean kids to break out of the results-obsessed strictures of the school system and embrace daft fun for fun’s sake through sports and general high-octane, low-pressure tomfoolery. They’re helped along by the chaotic, kinetic drive of Black John Lewis and the Honeybears’ ‘Boogie’, which has enough energy to tie every vignette together and a touch of gamey-eyed wonkiness to match the spot’s message (though that said, those dance routines still look suspiciously perfect.)

More breaking-free here, as Forza Horizont busts out of the track and into the Italian countryside (another Uncanny Valley live action experience reflecting the promise of a massive open world platform – some cheeky backlash to live action trailers is also out this week.) Accompanying stomach-turning speed on vertigo-inducing roads is the impossible catchiness of unpronounceable 1973 stomper Prisencolinensinainciusol, composed by Italian (of course) renaissance man Adriano Celentano and using nonsense words to reflect American English’s impression on a foreign ear. The shoulder-jerking beat, jazzily self-assured trumpets and rather sneering delivery match the unapologetically foolhardy stuntwork rather well.

Stephen Merchant’s quintessentially British physicality is at centre stage here, as his apparently head-turning style rapidly goes to his head. Between this and his roundly disdainful Newcastle series, could Merchant be carving out something of a niche for himself as American advertising’s go-to smug Brit? The bluesy flair of G Love and Special Sauce tops up his charm and puts the comical spring in his step.

A patient dog unkinks his road-weary limbs in the rare middle-of-nowhere pitstop that his owner’s fuel efficiency necessitates. Blue collar ballad Sixteen Tons (popularised by Tennessee Ernie Ford, and also seen this year in a vastly different context – and language – in Heineken’s Odyssey spot) provides something of both Southern swagger and resigned world-weariness, tempered by the wry, jaunty beat.