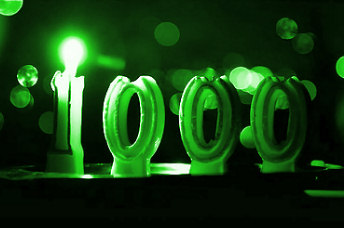 We’re delighted to have received over 1,000 likes on Facebook (so far entirely without the use of any underhanded methods, but we’re not ruling anything out.) Thank you all! It got us to pondering the number itself, which is a concept with a strong grip on the imagination of advertisers and consumers alike. Now, numerology isn’t really our division, so rather than getting into notions of divine completeness or celestial perfection, here are a few of our favourite examples of the number 1,000 in advertising action – in mostly sharp-synched spots, naturally.

Ford – Thousands of Possibilities. One Territory

A nicely edited look at the prospects a more generously-proportioned vehicle can offer. Despite the relatively sedate rotation, the infectious, head-bopping rhythm of Eliot “Paperboy” Reed’s ‘Woo Hoo’ and lively cuts lend the spot a more adventurous dynamism.

Georgia Jagger and her famous smirk lay out a particularly energetic dose of Rimmel’s spirited anglophilia – more po-faced Queen’s Guard, frogged jackets and Union Jacks (the horse is a nice touch) than you can shake a sceptre at.

If there’s something uncomfortably familiar in the unhinged slo-mo of this VS effort, your suspicions may just be correct: this is Michael Bay in full vein, snaking lenses around a glossy-haired model as he might a gleaming robot chassis. If you’re missing the explosions (no, really), try his 2010 spot.

Both the animation and the angle might seem awfully quaint now, but way back when that was serious listening power. Improbably spelled, riotous Frenchies Rinôçérôse typified a messy mid-noughties electro-rock that’s aged quite well.

Bastion of suave Christoph Waltz does the effortless legwork in this Deutsche Telekom spot. Although fretful (aided by composer Paul Haslinger’s brooding score), it’s more sedate than some of his other advertising appearances and culminates in an extremely cozy fireside tableau, though that rather aggressive toss at the end might jolt you out of your me-time reverie.