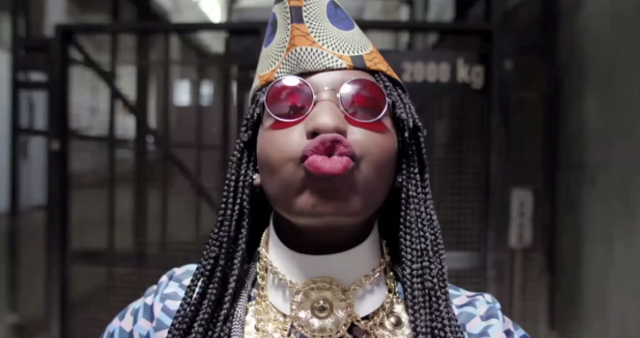 As things start to get a little autumnal in here, so do the stars – the week’s most sharply synched ads boast some silver-haired leads who never lack for style, and the swagger continues in a bold and breathlessly-paced look at African identities from an unexpected source.

Kmart are good for a chuckle with this enjoyably daft look at a grandma wit attitude. It’s a well-worn concept and German viewers may find shades of Friedrich Lichenstein impossible to ignore, but this is more Supafly than Supergeil, with a similarly weirdly compelling protagonist (though for all her verve, the spot’s proven divisive among Kmart’s clientele.) The spot’s swagger leans on an MIA-flavoured strut from producer R8dio.

More silver foxes lead the way in Betfred’s cheerful spot, albeit a little more vigorously. Wilson Pickett’s impossibly infectious hit keeps the spot bopping along with the ball, and adds to the pair’s charisma and golden oldie credence – even if they are just heading (geddit?) for a flutter.

Guinness Africa – Made of Black

An interesting choice here for Guinness’s continued push in the already strong African market. One of Kanye West’s fiercest songs, with lyrics seemingly deemed too fiery for other brands – defiance and pride it has in reams, but its searing meditations on race relations might not entirely jive with the positivity that the spot seems to be doling out along with its vibrant edge. There’s some half-hearted chopping of swearwords, but a decent amount of fury is left untouched. Whether it’s up to a Western-based multinational to write an African manifesto in the first place is a point to chew over – though the campaign does allow room for the local creatives featured to weigh in. In the end, there’s no denying that the song’s ferocious drive sets off the often electric, technicolor inventiveness of the montage, an energy we’re coming to expect from Rogue Films.