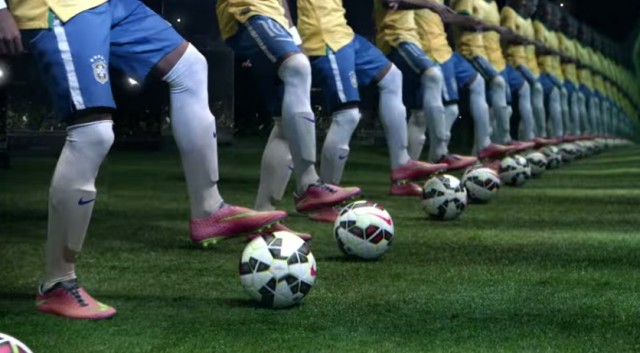 This week’s top ads for music synch are a mixture of the expected (bubbly indie shakes hands with wholesome social media collaboration, hip hop rolls out the green carpet for swaggering soccer feats) and the surprising (punk spits at the car creation montage).

The World Cup bruises are healing – we’re back to the Neymar and Messi as infallible soccer gods narrative, which, it must be said, does work pretty happily onscreen. Here neat if overly slick visuals are accompanied by the best and most swaggering track from RZA and Eli Roth’s largely forgotten hip hop, high kicks and high camp labour of love The Man with the Iron Fists. The whole thing might hark a little mistily to what could have been – does that discordant brass section have a hint of the vuvuzela to it? – but it works both as high-gloss escapism and as a next-time rallying cry.

Rich and homey visuals of wholesome creativity and collaboration partnered with cheerful indie might be nothing new, but done well it’s always a pleasure. The sparkling strings, high-swooping vocals and elastic rhythm of Kishi Bashi’s ‘Philosophize in it! Chemicalize with it!’ keep Pinterest’s spot gliding through its longer runtime.

Song: Philosophize in it! Chemicalize with it!
Artist: Kishi Bashi
Production: Strike Anywhere

The synching of even the most manufactured punk music in advertising – especially for a respectable sedan – will always be divisive, but there’s no denying that it hooks attention. Here the disconnect between gleaming automobile and grimy delivery is compelling as Sid Vicious slaughters Sinatra with a sneer over the seemingly fraught efforts of the Acura TLX’s engineers. Surprisingly fun, though it’s unlikely to convert many Pistols haters.

Miller – The Most Wonderful Time

Again disconnect does the legwork, this time for Miller Lite – the band’s full-sweep build, Andy Williams’ full-voiced delivery and the general jaunty joy of the most Christmassy of Christmas songs make something rather enjoyable out of a potentially tame concept. The festive glow translates quite well into sun-flares and sizzling barbecues, and the swing carries us through the more static Twitter-generated visuals.