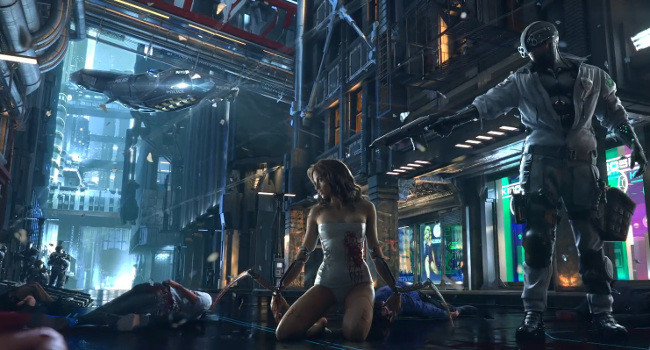 With E3 reaching its zenith today, ‘tis the season for glorious game trailers. We’ll round up our favourite music use from this year’s conference after the dust has settled, but today we’d like to take a quick look back at some of our all-time favourite game trailer music – top trailers, and the synced tunes that helped them pack a wallop.

We’ve looked at teasers and launch trailers of all sorts. We’ll admit that our tastes tend more towards the cinematic, and that the quality of these announcements didn’t always tally with the game’s actual performance – this is all about the art of the game trailer as shiver-inducing standalone. Be warned: given the titles, it goes without saying that some of these get pretty bloody!

Slo mo and hard psychedelic rock are a solid bet for a big entrance, and Austin’s The Black Angels delivered menacing strut in spades. We love the contrast with the Fable universe’s bright fantasy look and tough trailer styling, as a pack of bold-hatted revolutionaries tear down the corrupt trappings of a tyrannical king. While the game itself received some tough comparisons to its predecessors, its trailer certainly announced it in shining style.

Bioshock did glorious things with wry use of jazz classics, cutting the first game’s trailer with Bobby Darin’s Beyond the Sea, and the likes of The Mills Brothers’ ‘You Always Hurt The One You Love’ onto loading screens. For the distinctly different Bioshock Infinite, however, Irrational Games took a distinctly different tack. The gospel-flavoured intro of Neko Vega’s ‘Beast’ allowed a brief tour of Colombia’s astonishing, very much non-maritime world, and the sudden break slammed us into the brutal airborne action, while the venom-spitting lyrics about scrounging a life in a corrupt America spoke to the game’s ultimately twisted libertarian utopia.

We could have listed nothing but GTA trailers, but we’ve tried to rein it in. True to their name, Rockstar have an uncanny sense for game trailer music – they just get it, and more than a decade later Vice City remains a star in the gaming sync crown. They’ve never hesitated to embrace 80s and 90s hedonism in their song choices, but this trailer for Grand Theft Auto V went a little deeper – cut like a neat Sopranos-style movie trailer for Michael De Santa’s midlife crisis comedy, the trailer’s choice of Queen tallies nicely with his age and possible tastes in dad rock, neatly clothes the high-octane gangland violence, and somehow creates a (satisfyingly comic) wistful pathos. The Stevie Wonder version was more about plain fun.

Borderlands’ first iteration also showed canny music usage in its trailer, but didn’t embrace the song’s (Cage the Elephant’s ‘No Rest for the Wicked’) full-length potential (they later made better use of DJ Champion’s ‘No Heaven’. For Borderlands 2 the gloves were off: the trailer both nimbly lampooned the then-inescapable usage of dubstep in game trailers, and took advantage of the genre for its own daft fun. The buzz saw whirr of Nero’s Doomsday helped showcase the game’s richer but still idiosyncratic graphic style and continued gonzo daffiness – plus the inevitable wub wub break was used to fairly cute effect. An alternative trailer using The Tokens’ ‘The Lion Sleeps Tonight’ was also a lot of fun.

Sync favourite Woodkid owes at least part of his popularity to his placement in this E3 2012 trailer for the fourth main Assassin’s Creed installment. And it’s well justified – the primal drumbeat provide tension aplenty, the cresting trumpets sync perfectly to the balletic fight scene and the lyrics fit nicely to Ezio’s plight, creating a sleek yet operatic whole. Assassin’s Creed has shown bold but winning use of alternative music from the first, endearing UNKLE to a whole new audience.

More deft incongruity – setting lyrically wry oldies over scenes of the apocalypse is nothing revelatory, perhaps first (or most absolutely) perfected by Kubrick, but done well it’s always a treat. Here The Inkspots’ ‘I Don’t Want to Set the World on Fire’ provides an eerie accompaniment to a pan out over a mysteriously blasted city.

Song: I Don’t Want to Set the World on Fire
Artist: The Inkspots

Gears of War started a trend of more contemplative, surprising choices in game trailer sync with their use of Gary Jules’ ‘Mad World’ cover to highlight the pain and even moments of beauty in war, an unexpected choice for a rather full throttle shooter. If anything they dialed up the pathos even further for Gears of War 2, using DeVotchka’s ‘How It Ends’ to evoke a fatalistic dignity.

Song: How It Ends
Artist: DeVotchka

Another atypical choice that paid off – Halo also went for the heartstrings with this one for Halo 3. Rather than scaling up the quick-paced carnage, they scaled down – way down. In fact the camera pans around a painstakingly crafted battle diorama (supposed to have been, with an admirable depth of backstory, created as a later tribute to the battle’s heroes.) This is accompanied not by a swelling score or defiant rock, but rather a single classical piece on a single piano: Chopin’s Prelude no. 15 to Op. 28, also called the “raindrop” prelude. It’s equal parts hope and devastation, and the refreshing whole goes to show that sometimes less bombast really is more.

Does that dramatic orchestral piece sound awfully familiar? With good reason. Composing duo Two Steps From Hell, one of the most successful production companies to make trailer music their niche, arguably truly made their name with ‘Heart of Courage’, which found a significant early audience right here and went on to be synced in everything from Top Gear to America’s Got Talent. Proof of a game trailer’s true popularizing power.

This trailer for the stubbornly enigmatic Cyberpunk project has been kicking around for a year and a half now, and aside from some tantalizing concept art, has been more or less the only thing that would-be fans have to build hype from. But it’s some basis: from the gleaming, Dredd-stylish nighttime world to the gleaming menace of the unsettlingly indestructible, blade-augmented woman at the centre of the slow-motion frame, the sliver we’ve been giving is pretty damn compelling. Also in centre stage is Archive’s ‘Bullets’, bringing a lyrically apt drama that builds to a hard-fuzzed payoff as our hero is revealed – we think.

Kanye West’s hard-grinding anthem is a near-tailored complement to the abrasive charms of Saints Row. This trailer for the third installment is a catalogue of big entrance shoot-em-up drama, utilizing circle pans and stop-start slo-mo – in your face, somewhat obnoxious, but damned if it’s not a good time.