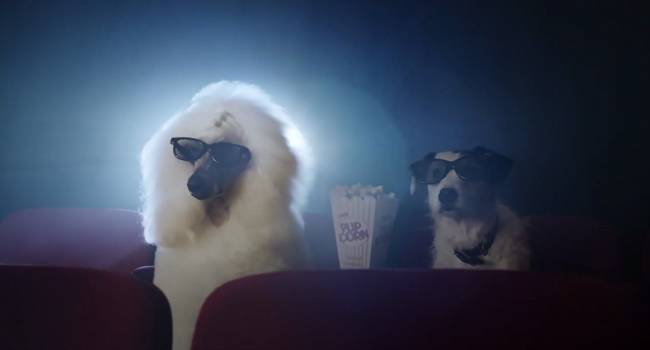 Our latest ad music roundup makes enjoyable use of eighties classics and soulful cover versions to highlight very different tones – knowing and coy in some, painfully frank in others.

Elsewhere in the ad world it’s been Skittle men (the logical if slightly less upsetting conclusion of a previous concept) and pitch-perfect sports spot sendups. The Christmas roundup brought sharp sound edits from Pocky and Film4, enjoyably shambolic caroling from the Big Issue, while Oral-B, of all brands, revealed an unexpectedly dirty mouth.

Downy – Rip Your Clothes On

Downy (Lenor to U.K types) conjures a particularly cozy, winter-appropriate flavour of intimacy with their topsy-turvy concept (though the spot, as well as its raunchier previous cut set to HAIM’s ‘My Song 5’, did a blink-and-you’ll-miss-it internet round in the summer). The ad soundtrack is a snug fit: a tender, rather torchy take on the 80s classic ‘We Don’t Have to Take Our Clothes Off’. In fact it’s worth comparing the two edits to see the profound difference that soundtrack and cuts can make to a spot’s tone.

It might have birdwatchers all of a flutter over its shaky bird-repatriation advice, but there’s a healthy sense of momentum and fun to this road trip, however misguided. A lot of that is thanks to Jake Bugg’s ad soundtrack – he’s quickly proving himself a playful automotive favourite.

After a break from the formula, Apple keep it colourful, bouncy and energetic with quick-flitting cuts and the help of Illinois band The Orwells, plus a fun if slightly too self-aware visual trick.

Song: Who needs you
Artist: The Orwells
Agency: In-house

The latest and possibly final installment in the saga of Harvey, the telly ad-endorsing dog (who’s never lacked for a sharp ad soundtrack) finds him getting lucky with an elegant lady poodle. The spot crams in every possible dog-related comedy trope, plus a few surprises – that cheeky Titanic nod, for one. The distinctly British twinkle in the eye is perfectly matched with the 80s earnestness of Glenn Medeiros.

Rather enigmatic entity adot.com’s beautifully shot spot on homelessness, dressed with the Scala Choir’s numbed take on Radiohead’s ‘Creep’, fairly hammers the point home, but it’s a point that just might be worth hammering. The cover’s lyrics are almost painfully on-the-nose – props for harnessing that discomfort to arresting effect.