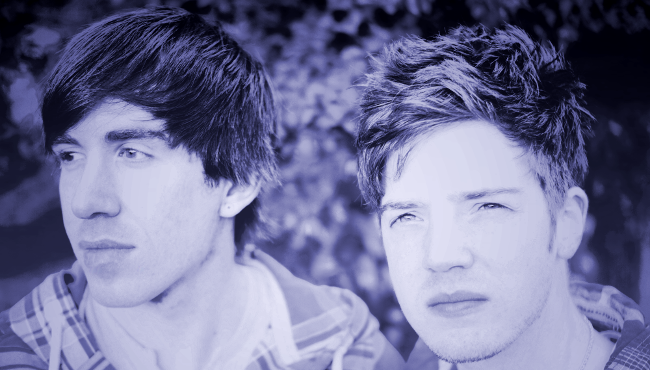 The musical side of the equation is crucial for us at Tracks & Fields, so we like to give our artists a chance to introduce themselves in their own words. SEAWAVES, otherwise known as fresh-faced Manchester 26-year-olds Si van Brussel and Dan Benjamin, don’t skimp on impact.

The pair weave a shimmering, emotive soundscape out of a deft blend of yearning vocals and partially digital instrumentation imbued with paradoxically warm and dreamy futuristic sensibilities. The exhilarated build of their track ‘Born to Fly’ led us to present them for Mercedes’ bold spot in March this year. The duo also compose outside the SEAWAVES umbrella, and their blithe indie tune ‘The Getaway’ is also to be found on Czech airwaves this month.

Dan: Aged 13 I wanted to learn guitar. I learned how to read guitar tabs, and began with some really basic tracks. It took at least six weeks of practising all day, everyday before it clicked. Learning the basics on a cheap acoustic was great because it took extra motivation to learn properly since the cheaper guitars were more difficult to play. I didn’t know this until I upgraded! Since then I’ve learned various other instruments… Once you get your head around the language of music, you can pick up other instruments faster. There’s always new things to learn in music and you can always improve.

Si: Before I was 15 I had never been interested in music at all, surprisingly. However that all changed during my rebellious teen years when I started listening to rock bands like System of a Down, Linkin Park, Korn etc. One day my friend showed me how to play a beat on the high school drum kit and after that I was hooked! My parents bought me an awful second-hand drum kit and I took up lessons locally. I practiced about three hours a day and was determined to learn the drum beats of my favourite bands – the first ever song I learned was ‘Stay together for the kids’ by Blink 182. Within two years I passed my grade eight performance exam and when I went to university started teaching myself guitar, piano, bass and eventually vocals. Soon after I started experimenting with songwriting and recording my own music.

Dan: We both began writing for SEAWAVES around 2011. We met through music college. It was never our intention to write music together until we were given a project where I had to record a band. I didn’t know any bands at the time so I asked Si could I record him instead. We learned we had similar taste and goals and worked well together. Up until then I had always found it difficult to work with other musicians/bands but with Si it was like sharing one big musical brain.

Dan: I’ve always been into music that gets you lost in imagination. I always try to make other people feel the same emotions I had when writing a new track. Our sound has developed somewhat over the years but it really comes down to me and Si as individuals. It’s our way of expressing ourselves. The genres given to our music tend to be ‘Dream-pop’ and ‘Indietronica’, which do a pretty good descriptive job. I like it to have a combined vintage and modern feel to it. Almost ‘space-like’ at times, always intriguing and varied.

Si: I always loved powerful music, of any kind, whether it be a really thumping metal song or a huge orchestral rendition of Bach. BIG drums, in-your-face guitars, intense vocals… Although in recent years I have been swept away by ambient and gentle music too. I have realised that any musical style can have power and emotion if the passion is put into it. Music is the quintessential expression of emotion – every feeling can be reflected with different chords, different keys and different tempos.

Dan: The vocals are now a big part of our sound. Previously I just wrote instrumental music. It’s great having a recognizable vocal sound in the music because we can write almost any style and put the lead vocal over it and it becomes ‘our track’. A continuity and consistency whilst being extremely varied is very important to me.

Dan: There’s a dreamlike quality to our music which I love because I find that emotions are exaggerated in dreams. Sometimes I dream the music whilst asleep, wake up and it’s like: mayday! ‘Si I’ve got a great idea for a track! I need to get these ideas down NOW!’ Sometimes the music’s already written for us by our subconscious. They’re the best kind of tracks.

Si: I’ve learned that inspiration can come from anywhere. We can be away from the studio one day and lo and behold a melody idea will come into my head, a line or lyrics. Or the atmosphere of a new place makes me want to write music to match. This is the good thing about smart phones. They can become your personal recorder as well as keeping you in touch at all times.

Dan: Organization is a key element especially when you have lots of ideas. Never dismiss an idea, always save it. Some of our ‘latest’ tracks weren’t even written recently. They might be ideas that began before this project even existed and are only just emerging now because we have the production know-how to present them well. SEAWAVES has a very particular sound, but we write new music everyday. We recently wrote a track called ‘The Getaway’ which isn’t a SEAWAVES-style track by any means but has gathered attention in the synch world. We try not to limit our writing capabilities. Striking the right balance between being known as SEAWAVES and as individual music composers working together is important for our future.

Si: We have just recently moved into a new, more high-end studio together which will allow our creativity to flow even more. We’re always challenging ourselves to be better: better performance, better mixing, better structures, better lyrics, just simply better music. We eventually want SEAWAVES to become an iconic 21st century music duo in the same respect as past legendary duos – Lennon & McCartney, Simon & Garfunkel, or more recently Daft Punk, MGMT, or Boards Of Canada. They all have a real, definable image. Manchester is also well known for having a successful musical timeline, which gives us extra motivation. It might seem like a big statement to make but why not reach for the stars? You have to have belief in this industry otherwise you’re doomed.

Dan: I also find it really inspiring to see how our music pairs with visual elements. Our music works best with imagination involved and the combination of visuals and music is always interesting and inspiring, especially when it’s someone else’s perspective and you might never have seen the music work in that way before.

How did you hear about Tracks & Fields and how long have you been members?

Dan: We were contacted by one of the staff asking if one of our tracks was available for a project. The track didn’t win that pitch but it was later picked up by Mercedes Benz for a TVC promoting the F1. Since then we’ve found Tracks & Fields to be one of the best supportive companies going for composers and artists.

Si: There’s a real honest efficiency in how they work and how it’s run. We’ve been members for around 8 months now, and we are always presented with the latest synch opportunities from all around the world. Its an artist’s dream come true and we look forward to a bright future working with them.