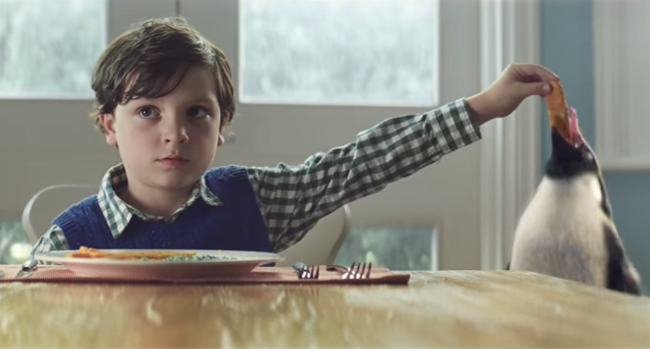 And so the season begins. This week has seen an outright flood of Christmas spots twinkle on to the airwaves, and despite our best intentions this week’s roundup of choice synch reflects that pretty clearly – this time it’s 90% festive.

In fact there are too many of the things to cram in here. At opposite ends of the brand spectrum, Burberry’s luxy if overlong special features Romeo Beckham’s moves and Ed Harcourt’s voice, while DFS opt for Satchmo and a sofa-delivering Santa. More offbeat music choices include Debenhams department store odyssey accompanied by Paul McCartney’s Frog Chorus, while Argos’ continuance of its dramatic rebrand is reflected in its festive music choice: Run DMC’s Christmas in Hollis. Speaking of reinvention, in less tinselly territory Gap is continuing to have a great time displaying its changed stripes (literally, in fact): there’s a fun musical collab with Dev Hynes, and a series of daft but entertaining shorts.

Guinness’ four heartening rugby-themed offerings ahead of the Autumn Internationals are all worth a watch, the others celebrating Munster’s unlikely triumph over the All Blacks, pint-sized Welsh powerhouse Shane Williams and master commentator Bill McLaren. This one though, focusing on Jonny Wilkinson’s enthusiastic adoption by French supporters after his transfer to Toulon, has the best musical support. The sweep of The Cinematic Orchestra’s ‘Arrival of the Birds’, originally from Disney Flamingo doc The Crimson Wing, is a fitting backdrop for the unscripted outpourings of Gallic warmth.

The wryly embittered message – give up your starry-eyed plans, well-intentioned parents, and trust to the magic of consumer goods to enchant your sprogs instead – is somewhat at odds with Jacob Steele’s wholesome indie tone, but the nautical theme certainly fits and any big-dreaming would-be crafter will recognise the feeling of all your DIY dreams crumbling about your ears.

So The Event came to pass – and hardly any earlier in the month than its predecessors, despite what the annual Scrooge brigade will insist. All the now-traditional elements are here. Sweet storyboard about showing your loved ones what they mean to you: check. Earnest, pared-down pop cover version: check. But does it deliver? Check check. Tempting as it is to be cynical, the warm fuzzies are at an acceptable level, that impressive CG penguin is legitimately likeable (and his take on downhill sledding extremely satisfying), and though Tom Odell’s falsetto might irk some, the lyrics and mood of this John Lennon cover are as bang-on as ever.

Sure, the format and the message are hardly ground-breaking, but this pay-it-forward montage does have some cute moments, and the distinctive plucked strings of Jimmy Durante’s Make Someone Happy, by far the most famous and charming version of the tune, are so irrepressible that it might just worm a grin out of you after all.

Best not to spoil this one – suffice to say Boots have managed to convey the grumbling hassle that Christmas can entail, and slip in their products realistically (even self-deprecatingly) without compromising on genuine sweetness. Bolstering the low-key warmth is British, Berlin-based singer-songwriter Alexi Murdoch.