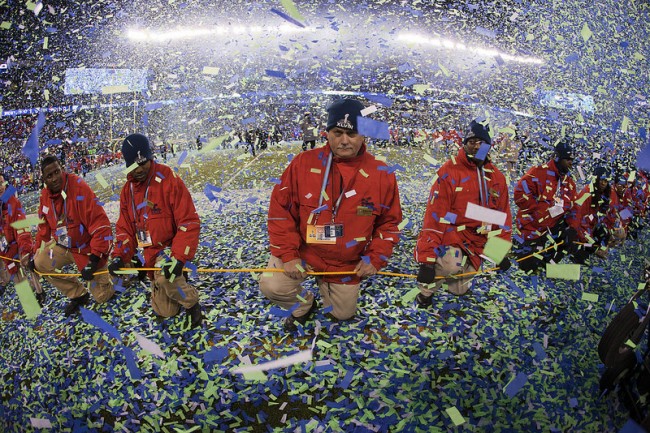 On Sunday evening, as millions of American football fans around the world gathered to watch what many consider the sporting highlight of the year, the advertising community did just the same, only the score being kept was very different…

In many respects, the battle to be king of the commercial break is just as fierce as the one on the pitch. Still, while 2014 belonged to the Seahawks’ by a long shot, this year’s clash of Super Bowl adverts was a far closer affair.

With so many conflicting accounts circling as to which adverts were the most effective, we decided to conduct our own little study into the matter. To do this we monitored three key metrics:

Taking results from these three areas we were able to give each brand an overall score, which we believe is a fair indication of the advert’s cross-platform success in the immediate aftermath of its broadcast. We’ve got our own opinions on which we felt had the best uses of music. But, for now, here are the ‘most popular’ commercials according to social media activity since the big game:

Ok, so we said the results were close this year, but really no-one was surprised when this one came out on top. Budweiser’s previous Clydesdale horse commercial was already a phenomenally successful piece of advertising, so the addition of one outrageously cute puppy and one undeniably charming soundtrack—itself a no.1 single in no less than 19 countries—was always going to be like kryptonite to people’s hearts. The music fits the mood both lyrically and stylistically, with a well timed uplift in the final moments, making this a remarkably well-produced advert overall.

They kept it under their hat until the night itself, which gave the unveiling of Microsoft’s latest commercial all the more emotional impact. Focusing on the ways technology is helping improve the lives of people in extraordinary circumstances—from next-generation X-ray technology to providing artificial speech for those suffering paralysis like former NFL player Steve Gleason—it packs in an impressive number of micro-stories into its 60-second runtime. Meanwhile, the slow, warm build of the soundtrack and major key tone plays up the sense of optimism, and was actually constructed using samples from Microsoft products like Windows, Outlook, and Xbox. A nice added touch for the fans out there that we really liked.

As America’s—and the world’s—best known brand, it wasn’t a surprise to find Coca-Cola brought a big offering to the screens of the Super Bowl. They ran two commercials during the broadcast, although the most successful was their ‘It’s Beautiful’ slot: an epic, artistic montage of people and landscapes across the USA, highlighting the racial diversity of those who call it their home. Music-wise, the creators opted for a bespoke piece, with proud lyrics centred around the myriad virtues of Americanism. The big twist is that it’s sung in eight different languages! It’s clearly intended to mimic a national anthem, and what an anthem that would be. Hats off to Coke for imbuing their core brand values of inclusion and diversity with some real national pride.

There’s going big on your music budget, and there’s GOING BIG on your music budget. And, when it comes to band/brand hook-ups, it doesn’t come much bigger than securing an exclusive tie-in with U2 for the launch of their new single. In partnership with international AIDS charity (RED), the three-way campaign sees Bono and his merry band in maximum superstar mode, doing exactly what they do best: soaring, stadium rock with an instantly familiar chorus. Even without the charitable tie-in, this is the kind of thing to send sports audiences rushing for their smartphones to claim the free download, so two thumbs up for Bank Of America for tapping into that captive market. Bonus for the over $2 million it raised for the cause.

Bank Of America weren’t the only ones to plump up serious cash for a superstar endorsement, and Chrysler’s effort certainly stirred up a reaction on social media. The Detroit-based car manufacturer was in need of a genuine American icon to help voice its campaign to support the domestic automobile industry, but they scored big with Bob Dylan. While the spot features music from the man himself underneath a shifting montage of American historical iconography, the real hero here is Dylan’s inimitable voice. Near-poetic in its delivery, it really dials up Chrysler’s sense of heritage—an important selling point when marketing a brand as close as this to many Americans’ hearts.

The remaining top 5 was as follows: